Once you have a sulfur filter chemicals feed tank, you will have to add chemicals into the tank every couple of months.

Sulfur-oxidizing bacteria produce effects similar to those of iron bacteria. They convert sulfide into sulfate, producing a dark slime that can clog plumbing. Sulfur-reducing bacteria live in oxygen-deficient environments. They break down sulfur compounds, producing hydrogen sulfide gas in the process 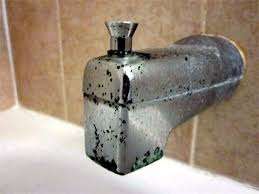 In most cases, the rotten egg smell does not relate to the sanitary quality of the water. However, in rare instances, the gas may result from sewage or other pollution. It is a good idea to have the well tested for the standard sanitary tests of coliform bacteria and nitrate. Sulfur bacteria are not harmful, but hydrogen sulfide gas in the air can be hazardous at high levels. It is important to take steps to remove the gas from the water or vent the gas to the atmosphere so that it will not collect in low-lying spaces, such as well pits, basements, or enclosed spaces, such as well houses. Only qualified people who have received special training and use proper safety procedures should enter a well pit or other enclosed space where hydrogen sulfide gas may be present.

Are there other problems associated with sulfur bacteria or hydrogen sulfide?

Yes. Sulfur bacteria produce a slime and can promote the growth of other bacteria, such as iron bacteria. The slime can clog wells, plumbing, and irrigation systems. See right photo of growth in the pipes.

Bacterial slime may be white, grey, black, or reddish-brown if associated with iron bacteria. Hydrogen sulfide gas in water can cause black stains on silverware and plumbing fixtures. It can also corrode pipes and other metal components of the water distribution system.

In addition to the chemical feed tank you can add an uv light to neutralize the bacteria from reproducing . 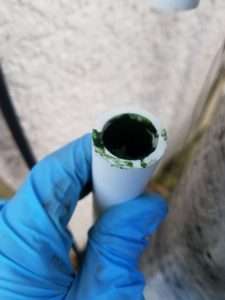 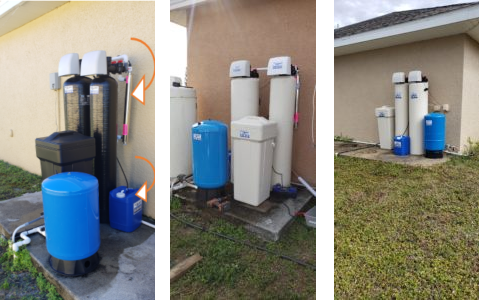 A UV sterilizer is used to control infections by stopping the spread of microorganisms from one fish/coral/invertebrate to another through the water. It is also used in pond applications to control free-floating algae. When operated correctly, free-floating microorganisms will be killed by the UV light. Note that the organisms must be in the water that flows to the UV sterilizer. The UV light has no residual effect and will not kill organisms attached to fish (e.g., adult stage of ich) or rocks (e.g., algae).